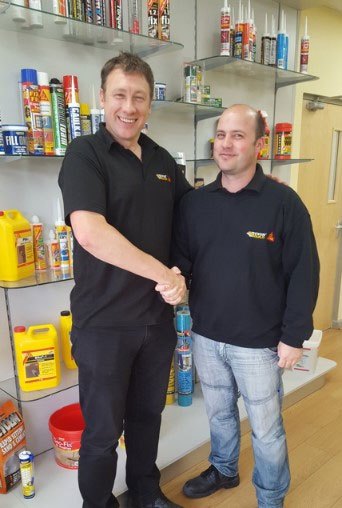 LBS are proud to report recent promotions of two employees at Sika Everbuild the countries’ biggest and most respected suppliers of sealants and adhesives.

Congratulations to Steve and Shpetim!

Steve Turver is moving out of Continuous Improvement and Training to become Health, Safety and Environmental advisor. Steve will be succeeded by Shpetim Hysenaj as CI and Training advisor. LBS is particularly proud of this recognition for Steve and Shpetim as they have both undertaken much of their Lean training with us.

Background Steve joined Everbuild 8 years ago from the printing industry, starting as a machine operator then line supervisor, this was followed by Steve taking up the role of Training and Continuous Improvement Manager 5 years ago. During the CI role Steve has undertaken a series of programmes to develop his Lean capabilities, including our 10 day Lean programme, Lean Sigma Green Belt and topped off with his City & Guilds Licentiate becoming Steve Turver LCGI. In between raising a family, DIY and music festivals, he is currently doing his Nebosh to support his new role.

Shpetim studied construction in Kosovo before joining Everbuild 11 years ago as a line server and has since held the role of deputy supervisor. Having done Level 2 NVQ and Level 3 Apprenticeship, Shpetim now looks forward to advancing his CI knowledge and adding the Level 4 Licentiateship to his qualification this autumn. Outside work he keeps busy with family time for his wife and 2 children and football.

“The training delivered by LBS has proved truly invaluable, both for my own personal development and the push for continual improvement at Sika Everbuild.” Steve Turver